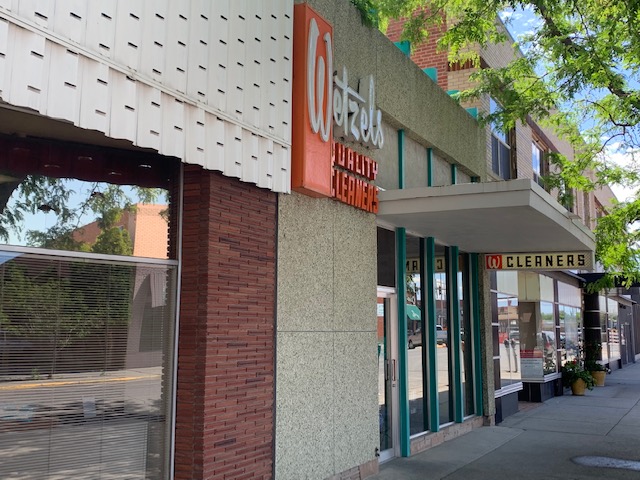 Wetzels Quality Cleaners is a 3rd-generation, family owned company with over 105 years of dedication to excellence. Founded in 1915 by Emery Jacob Wetzel, our company heritage began as The Billings Dye House.

As the original name suggests, dying fabric was a huge part of our business in the early days. Clothing dyes of that era often faded very quickly and so re-dying was just one step of the dry cleaning process. Over time, dyes became more lasting and we left dying and our first name behind, becoming Wetzels Quality Cleaners.

Emery James Wetzel, second generation, joined his parents in the business in 1957. At the time, Billings was home to more than 20 dry cleaning stores, including numerous stores in downtown Billings. Wetzels was a mom and pop operation but both parents had been ill and the business had suffered with them.

Emery James felt that in the competitive Billings market he needed to create a niche. Not having the means to aim to be the biggest, he decided to make it his goal to be the best and so that attention to detail became the driving force to move Wetzels into the future. Under his leadership, Wetzels survived and thrived and was able to expand and upgrade equipment.

Like his parents before him, it wasn’t just Emery who invested in Wetzels! His wife, Joyce, helped in numerous capacities over the years and their children, Scott and Kim, also spent many hours at Wetzels as they grew.

Scott assisted with many maintenance projects and installations of equipment and Kim helped with bookkeeping and customer service.  Eventually, Scott and Kim took over the leadership of Wetzels and continue today to try to carry on and build upon the legacy that has been handed down to them.

Over all the years and changes, our goal remains the same: to give you the best service that we can!

Wetzels Quality Cleaners is a 3rd generation, family-owned dry cleaning business with over 105 years of service here in Billings.  At Wetzels we strive to deliver an excellent product and excellent service.  We have one convenient location in downtown Billings.  You can trust that your items are in good hands at Wetzels.  Our team consists of trained staff with many years experience in quality garment care.  As Billings' only Sanitone Certified Master Dry Cleaners, we use the best dry cleaning products on the market today for more vibrant colors and a pleasing, soft feel to your garments. Try us today.  We believe the difference shows.